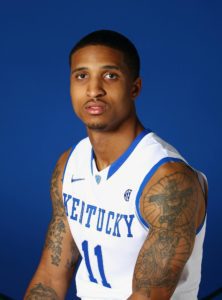 Twany Beckham was born Antiquawn Beckham on November 14, 1988, in Louisville, Kentucky to Debra Beckham.  Beckham grew up in Louisville, in one of roughest parts of the inner city. At a very young age, he found a passion in sports and used sports as a tool to help navigate him to success. Twany excelled in all youth sports and went on to become one of Ballard High School’s all-time great players.

In high school, Beckham was a three-year starter for coach Chris Renner at Ballard High School in Louisville, Kentucky where he helped pace the Bruins to a three-year composite mark of 86-16 (.843) and a pair of Sweet 16 state tournament appearances.  He averaged 16.1 points, 8.1 rebounds, 4.2 assists and 2.3 steals per game to earn first-team all-state honors and was chosen the 7th Region Player of the Year in 2006-07.  Beckham capped his Ballard High School career by representing his home state in the Indiana Kentucky All-Star series.  He recorded 11 double-doubles in 2006-07, including a triple-double with 12 points, 11 assists and 10 rebounds in only 18 minutes against Manual in the regional tournament. Beckham posted 10 games with 20 or more points in 2006-07, including a season-high 31 points, 11 boards, seven steals and five assists versus St. Xavier.  He was named MVP of the prestigious 2007 Louisville Invitational Tournament (LIT), averaging 22.5 points on 65-percent shooting (39-60 FGs) during the four-game tournament.  Beckham tipped off the LIT with a 29-point performance (13-18 FGs) against Pleasure Ridge Park and capped a mid-season, six-game stretch, in which he averaged 24.0 points on 62.6 percent shooting (57-91 FGs), with a 28-point effort versus Waggener. He was credited with double-digit rebounds 12 times in 2006-07, including 20 and 16 boards (22 of the 36 rebounds were offensive) his first two outings of the year.  Beckham was named to the 2007 Kentucky High School Athletic Association (KHSAA) Sweet 16 All-Tournament Team after leading the Bruins to a 35-3 record and a state runner-up finish.  Beckham averaged 14.3 points, 6.6 rebounds, 4.9 assists and 2.2 steals per contest as a junior to earn third-team all-state laurels from the Courier- Journal newspaper and help pace the 2005-06 Ballard club to a 22-10 mark.  He averaged 6.9 points, 4.0 assists, 3.4 rebounds and 2.1 steals an outing as a sophomore starter for the Bruins’ 29-3 Sweet 16 ballclub in 2004-05.

Beckham originally signed to play for Indiana University–Purdue University Indianapolis (IUPUI) but decided to attend prep school after finishing his high school career where he was able to concentrate on academics and play in a high-level prep school basketball league.  He averaged 15.0 points, 6.0 rebounds and 8.0 assists as a fifth-year player for coach Pete Hutchins at the New Hampton School in the highly competitive Class A division of the New England Preparatory School Athletic council. He led the Huskies in assists and ranked as the team’s second-leading scorer.

On April 16, 2008, Beckham signed a letter of intent to play for Mississippi State.  Due to a foot injury, he did not play the first three games.  Beckham saw his first action against Fairleigh Dickinson and responded with four points on 2-of-2 shooting.  He also had two rebounds, two assists, and two steals against the Knights.  He had his most productive outing at St. Bonaventure, scoring a career-high eight points on 2-of-3 shooting from the floor and 4-of-6 shooting at the foul line in 20 minutes.  He also dished out three assists, had one steal, and just one turnover.  Beckham played in the last 32 games and was one of MSU’s first players off the bench where he averaged 1.6 points and 1.5 rebounds. He logged a total of 33 minutes in the SEC Tournament and averaged 1.5 points, 2.0 rebounds, and dished out three assists.  His best game was against Georgia, where he tallied three points and was credited with two assists. He played seven minutes against Washington in the NCAA Tournament and did not score.

In 2009-10, Beckham redshirted the entire year after having surgery on both hips to remove bone spurs.

As a redshirt sophomore in 2010-11, Beckham played in 14 games for Mississippi State before transferring to UK after the fall semester.  He started five of the 14 games he played.  Beckham had a career-high nine points against Detroit and a career-best seven assists versus Appalachian State

As a redshirt senior in 2012-13, Beckham had back surgery and missed the final part of the season.  He played nine minutes against Eastern Michigan, a personal best in a UK uniform.  Beckham saw his first action of the season against Lafayette logging four minutes and scoring his first career points at UK on a lay-up.

Beckham was an all-academic SEC performing student and was a member of the 2012 Kentucky men’s basketball national championship team. He was named a finalist for the 2013 Arthur Ashe Jr. Sports Scholar Award. Beckham was chosen from more than 500 minority student-athletes nominated by their respective institutions. The NCAA is the co-sponsor of the annual award.

He graduated in 2013 with a degree in communications which laid the foundation for his post-basketball career.