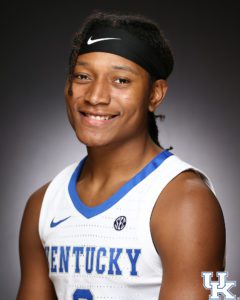 TyTy Washington was born Tyrone Lewis Washington on November 15, 2001, in Phoenix, Arizona to Felicia Caldwell and Tyrone Washington Sr. He has two siblings: Tatyana and Tyrique.

In high school, Washington played basketball for Cesar Chavez High School in Phoenix, Arizona. As a sophomore, he averaged 23.2 points, 4.1 assists, 4.4 rebounds, and 3.3 steals per game. Washington transferred to AZ Compass Prep School in Chandler, Arizona during his junior season. As a senior, he averaged 24 points, seven assists, and six rebounds per game, leading his team to a 30–2 record. Washington was named the MaxPreps Arizona Player of the Year. Washington connected on 48% of his shots, including 41% from 3-point range and 88% from the free-throw line. He was ranked as high as the No. 14 overall player by Rivals and ESPN and second at his position by ESPN.

Washington originally committed to Creighton in November of 2020 but decommitted on March 11, 2021, and announced that he would be playing for Kentucky on May 12, 2021 over offers from Arizona, Baylor, Kansas, LSU and Oregon..

As a freshman at Kentucky, Washington was a Jerry West Award semifinalist and he made the Kyle Macy CollegeInsider Freshman All-America Team. He was a second-team selection to the All-SEC squad by the league’s coaches and was an All-SEC Freshman Team selection . Washington appeared in 31 games and made 29 starts. He missed three games due to an injury. Washington was ranked second on the team in scoring (388), assists (120), and steals (40) and averaged 12.5 points, 3.9 assists, and 3.5 rebounds per game. Washington was the only freshman in the country to average at least 12.5 points, 3.5 rebounds, and 3.9 assists per game while shooting at least 45% from the floor and at least 35% from 3-point range. He paced the SEC with a 2.35 assist-to-turnover ratio and ranked ninth in assists per game. He set a UK single-game record with 17 assists in the win over Georgia, which bettered John Wall’s record of 16 against Hartford in December 2009. He had 20 double-figure scoring efforts and paced the team in scoring on five occasions and he had 21 games with three or more assists. Washington totaled a pair of double-doubles and became the first Wildcat since 2020 to have one in the points-assists variety and another in the points-rebounds kind. His first double-figure scoring effort came in the home opener against Robert Morris on November 10, 2021, with 10 points. On November 19, 2021, He earned his first career double-double with 20 points and 12 rebounds while adding five assists, a block, and a steal in the home victory over Ohio. He logged 17 points and 17 assists to go along with five boards and a pair of steals against Georgia on January 8, 2022. Washington scored a career-high 28 points to couple with five assists and three steals in the historic win over Tennessee at home on January 15, 2022. He logged a team-high 25 points behind a career-best four 3-pointers in the win over Vanderbilt in the SEC Tournament quarterfinals on March 11, 2022. On March 12, 2022, Washington had 17 points, six rebounds, four assists and three steals in the loss to Tennessee in the SEC Tournament semifinals.

On April 6, 2022, Washington declared for the 2022 NBA draft, forgoing his remaining college eligibility. He was selected 29th overall by the Memphis Grizzlies but was subsequently traded to the Houston Rockets.