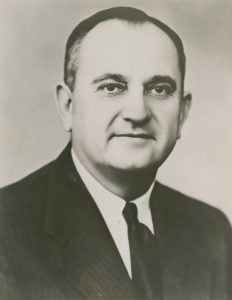 “In the storied land of Kentucky Colonels, there dwelled but one Baron, a man of consummate pride and a molder of powerful teams which for more than four decades made the name University of Kentucky synonymous with the game of basketball.”

Rupp was born outside Halstead, Kansas, to Mennonite German immigrants, the fourth of six children. He grew up on a 173-acre farm which his father Heinrich homesteaded. After his father’s death in 1910, Rupp’s oldest brother Otto took over farming responsibilities. As a youngster, Rupp worked on the farm and attended a school in a one-room school house in the country. He first became interested in the sport of basketball at the age of six when Halstead won the first of two consecutive Kansas state high school titles. According to interviews, he and his brothers stuffed rags into a gunnysack which his mother sewed up to use as a basketball on the family farm. Later, after growing to a sturdy 6-foot-2, Rupp was a star on his Halstead High School team, averaging over 19 points a game in both his junior and senior years. Rupp also served as team captain and unofficial coach.

After high school, Rupp attended the University of Kansas from 1919–1923. He worked part-time at the student Jayhawk Cafe to help pay his college expenses. He was a reserve on the basketball team under legendary coach Forrest “Phog” Allen from 1919 to 1923. Assisting Allen during that time was his former coach and inventor of the game of basketball, James Naismith, who Rupp also got to know well during his time in Lawrence.  In Rupp’s junior and senior college seasons (1921–22 and 1922–23), Kansas (KU) had outstanding basketball squads. Later, both of these standout Kansas teams would be awarded the Helms National Championship, recognizing the Jayhawks as the top team in the nation during those seasons.

Tutored by the great Phog Allen at Kansas and a student of the game under Dr. James Naismith, Rupp learned his craft at an early age. After leaving the high school ranks in Freeport, Ill., to take the UK job in 1930, the “man in the brown suit” became the winningest coach in all of college basketball. He was an innovator of the fast break, a trademark of the Wildcats even today.   From the March 3, 1931 issue of the Kentucky Kernel, “Adolph Rupp came to Kentucky this year to take over the Wildcats who were versed in the art of the “slow break.”  Rupp had a new system, but critics were skeptical about his ability to introduce to the new fast system to the ‘Cats in one season.  He had never coached a college team before.  He won the majority of his games as a high school coach in Freeport, Illinois, and this season has proved himself of the caliber that makes championship teams. Sports writers of the South have lauded him for his great work and the Kentucky team won a place as one of the seeded teams in the Southern Conference, which is being run off this week. Rupp developed a winning combination from green material and his team lost but two games this season.  Adolph is popular with the players and the fans and besides being a great coach, he is known by everyone as a good fellow.”  You can read more about the hiring of Rupp and his first season here.

Rupp unveiled his new system on the night of December 19, 1930.  With Aggie Sale scoring 19 points and Louis McGinnis adding 17, the Wildcats stormed past Georgetown College 67-19.  The Rupp era was off to a blazing start.

Rupp went on to become the winningest coach in his sport. He passed his mentor, Coach Allen, on March 12, 1966, with his 747th victory against Dayton) in the Mideast Regional. He achieved the top ranking when he passed Western Kentucky’s E.A. Diddle with victory No. 760 on Feb. 18,1967, at Mississippi State.

Rupp finished with 876 wins when he retired in 1972, a mark that stood for 25 years until North Carolina’s Dean Smith moved ahead during the 1997 season.  Rupp is currently fourth (behind Bob Knight, Mike Krzyzewski and Dean Smith) in total victories by a men’s NCAA Division I college coach. Rupp is also second among all coaches in all-time winning percentage (.822), trailing only Clair Bee.

At Kentucky, he earned the titles “Baron of the Bluegrass” and “The Man in the Brown Suit” (Rupp always wore a brown suit to games). Rupp was a master of motivation and strategy, often using local talent to build his teams. In fact, throughout his career, more than 80% of Rupp’s players came from the state of Kentucky. Rupp promoted a sticky man-to man defense, a fluid set offense, perfect individual fundamentals, and a relentless fast break that battered opponents into defeat. Rupp demanded 100% effort from his players at all times, pushing them to great levels of success.

Rupp died at age 76 in Lexington, Kentucky, on December 10, 1977, on a night that Kentucky defeated his alma mater, Kansas, at Allen Fieldhouse in Lawrence, Kansas. The game that night was promoted as “Adolph Rupp Night”. He is buried in Lexington Cemetery.