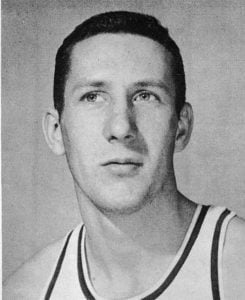 Adrian Smith, also known as “Odie” (spelled Oddie in newspaper accounts from his high school days) was born Adrian Howard Smith on October 5, 1936, in Graves County, Kentucky to Ruth Penny and Oury Smith. His father Oury drove a dairy truck that picked up milk at area farms, drove a school bus and farmed while mother Ruth raised the six children. Smith’s share of a tobacco crop as a young man helped buy him his first basketball. Smith was a starting guard on the 1958 NCAA Championship “Fiddlin’ Five” team.

Smith, only the third junior college product to ever don a UK uniform at the time, is a native Kentuckian. But had it not been for the insistence of the school’s principal/coach, Smith might not even have played high school basketball. As a child, Smith and his family lived on a creek in a house with no electricity. He attended a three-room schoolhouse during his first eight grades. He was the leader of Farmington High School when it won its first trophy in the school’s history. He scored 37 points on January 30, 1954, as Farmington walloped Melber, 115-39. “Odie” led the team through the third district tournament in 1954 and went to the region as the number two team from that region, but the Gophers had the first and only trophy in the school’s history. While in high school, Adrian fell just short of the first region scoring crown. The 5-10 guard fell second to teammate Harold Ross with a 28.8 average. Following graduation and because of his lack of height, he received offers from only two colleges, one a junior college. Odie chose Northeast Mississippi Junior College over the four-year school and at the end of the two years had made quite a name for himself. He just missed the Junior college All-American team his second year but made both All-Conference and All-Regional both years. He led the team in scoring and in his sophomore year finished with a 27.2 average to place fifth among all junior college scorers. His two-year point total was 1,524. He led Northeast to the conference title both years he attended the school.

Smith never dreamed he would wind up at UK. His coach kept after coach Rupp to take a look at his star player, and finally, Rupp sent a trainer and scout to watch Smith practice. Rupp had given just two previous junior college players a scholarship but based on the scout’s word he offered Smith one. In June of 1956, Smith signed a grant-in-aid to play for Kentucky and enrolled in the summer session. He became the eighth guard on a team that was already well staffed at the position, but Smith didn’t care. It was his dream to play at UK– the first of many dreams he would come to realize. Smith never even met Rupp until he showed up for summer school, then saw him on occasion while practicing on his own at Memorial Coliseum that summer. The first weeks of practice were particularly hard as he tried to catch up with established players including a pair of returning starters at guard. “I was scared to death the first time I met him (Rupp) and this program is so intimidating,” said Smith. “But putting on that uniform the first time was something very special. It was tough getting in there as a junior because they believed in getting you in there as a freshman and indoctrinating you into their system.”

As a junior, Smith was one of the country’s best bench players and did an outstanding job during the last half of the season as a replacement for Vernon Hatton, who was sidelined for some time following an appendectomy. As a sub for Gerry Calvert on January 19, 1957, Smith scored 16 points, 12 in the second half, against upset-minded Tennessee. That nearly equaled his total points through his first 9 games. The Cats won that one 97-72. On January 28, 1957, in front of the largest crowd to watch a basketball game in Atlanta (6,800), Smith scored a career-high 24 points to lead the Wildcats in a 76-65 win over Georgia Tech. Little Adrian Smith continued to be a fireball and pitched in 20 points as Kentucky routed Georgia, 84-53, on January 30, 1957. Smith was inserted into the lineup four games prior to that amid a search for a replacement for the ailing Vernon Hatton. The speedy Smith proceeded to pitch in 70 points in those four contests, more than taking up his share of the slack. On February 2, 1957, Smith, filling in again for the ailing Vernon Hatton, turned in his fifth straight sterling performance in a win over Florida. He tabbed 18 points, and along with redhead Gerry Calvert, directed the Cat offense. His total for the five-game span filling in for Hatton rose to 88—an average of 17.6 a contest, which is what Hatton was averaging when he was sidelined.

As a senior, Adrian Smith replaced graduated Gerry Calvert in the starting lineup. On December 14, 1957, Smith scored 21 points to lead the Cat attack in a 73-60 win over St. Louis. On December 21, 1957, in a win over Minnesota, Kentucky scoring honors went to Vernon Hatton with 21 points, but it was Smith’s pot shots from afar during the middle of the first half that sent the Wildcats into a commanding lead. Smith wound up with 19 points, 14 of them coming in the first half. Against Tennessee, on March 1, 1958, Smith, subbing for Earl Adkins, led Kentucky with 18 points as the Wildcats clinched their 19th SEC crown by a score of 77-66. On March 14, 1958, in the second round of the 1958 NCAA Tournament, Smith scored 18 points in a win over Miami of Ohio.

The December effort was a rugged one for Kentucky and took its toll. Going into the SEC schedule, the Wildcats were a tired club. But it finished strong, taking undisputed hold of its 19th SEC championship by beating big Tennessee in the final game of the season. The Cats ended with a 14-2 conference mark, were 19-6 overall during the regular season, and 21-6 going into the national finals.

From barn dance fiddlers to Freedom Hall violinists might serve as a description of the ‘Fighting Five’ which took the NCAA national championship. Early in the season Coach Rupp said his boys were fair fiddlers but weren’t violinists who might appear in Carnegie Hall. After the championship game, he took back that statement. Fans expected this would be a banner year for the Wildcats before the season opened. But after a few games, they changed their minds as the Wildcats had to fight for their lives. This was the case throughout the season. After finally taking their 19th SEC title, the Wildcats jelled in the tourney. Though the Big Blue finished with the second worst season record in Rupp’s career here (19-6) when the schedule they played is perused it becomes clear why it was so. The Wildcats finished in ninth place in the final Associated Press weekly poll. They played five of the other nine clubs in the top ten. They lost to first-place West Virginia in the UKIT, gave fifth-place Temple two of its three losses, lost to 6th-place Maryland, and knocked off eighth-place Notre Dame and 10th-place Duke. They also played three teams in the next ten clubs as they downed Mississippi State the 15th club, lost to 16th Auburn by one point, and blasted 18th place Seattle for the title. For the first time in years, not one Kentucky player appeared on an All-American team.  Yet they still won a title.

Smith finished the season with 360 points giving him an average of 12.4 per game which was good enough for 4th on the team. “I never wanted to play anything but big-time basketball, and that for the University of Kentucky,” says Smitty. “Despite added pressure and harder work that goes with it, I get a bigger kick and more satisfaction all around playing for UK than I did any other basketball I ever played.”

Adrian Smith was also a member of the Lamda Chi Alpha social fraternity.

Smith was drafted 86th overall in the 15th Round of the 1958 NBA Draft by the Cincinnati Royals.

Out of college, Smith joined the Army when he couldn’t find work back home, but the Army sent him to play basketball for the Armed Forces team. It was while in the Army that Smith got a chance to try out for the 1959 Pan American Games. He made the basketball team and won a gold medal. But it wasn’t the first. In 1960 Smith made the U.S. Olympic team that won in Rome. “It was the ultimate,” Smith said. “Having that opportunity to play for the United States of America was more than I could comprehend.” That 1960 U.S. Olympic team included future Hall of Famers Jerry West, Oscar Robertson, Jerry Lucas, and Ron Bellamy. Robertson was Smith’s Olympic roommate, an NBA teammate at Cincinnati, and is still a close friend.

He played professional basketball for 11 years when his two-year Army stint ended. Smith played for the Cincinnati Royals for 8 1/2 years, the San Francisco Warriors (now Golden State Warriors) for two years, and finished his career in the American Basketball Association with the Virginia Squires. “I wanted to make the All-Star team just once in my career,” Smith said. And when he found out in 1966 that he would play in the All-Star Game, Smith said he remembers telling his wife, “If I play just one minute, I’ll be satisfied.” But as it happened throughout his career, Smith did more than that. He was voted the game’s most valuable player. He came off the bench when Jerry West was injured and scored 24 points in 26 minutes.

Smith retired from basketball in 1962 and became vice president of the Fifth Third Bank of Cincinnati. He still has the 1966 Ford Galaxie he won as the All-Star MVP.

Smith was inducted into the Naismith Memorial Basketball Hall of Fame as a member of the 1960 gold-medal-winning U.S. Olympic basketball team on August 13, 2010.