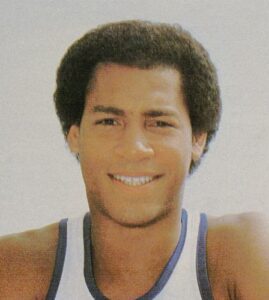 Derrick Cansler Hord was born September 19, 1960, to Elvira and Bobby Hord.  He played his high school ball for Tennessee High in Bristol, Tennessee.  Hord, unquestionably the best prospect to play in the Gateway region of Tennessee, if not the best player ever from the state of Tennessee, led the Big Seven Conference and Upper East Tennessee in scoring with a 27.6 point average.  He also averaged 13.4 rebounds a game.  It had been 30 years since Tennessee High last won a conference championship outright until Hord led the Vikings to one.  He was invited to play in five of the most prestigious post-season classics in the nation. Hord, whose father Bobby was a standout athlete at old Douglass High School in Kingsport, was selected as the top prospect in the nation as a sophomore and junior by Basketball Weekly.  Hord’s four-year high school career point total was 2,785 in 127 games.  His varsity average was 21.9 per game.  Hord, coming out of high school, had the necessary ingredients – strong mental approach, great physical ability, coordination and desire – to become a super-star.

He was inducted into the Basketball Hall of High Fame, High School Division in April of 1979.

As a freshman at Kentucky, Hord played in all 33 games, starting two.  He was fifth in time played with 647 minutes and sixth in scoring with 5.9 points per game to go with 2.5 rebounds.  He had a season high 18 points vs. South Carolina and Florida.  He started against Notre Dame on national TV, pulling down a game high 11 rebounds and scoring 10 points, as the Cats whipped the Irish, who was 6-0 and ranked 3rd in the country at the time, 86-80.  Hord was extremely quick for his size and was dubbed a great clutch performer who needs only consistency to become a super player.  Coach Hall said of Hord, “Derrick Hord has talent to burn and he will be a sure-fire success.  His attitude, desire and competitiveness, along with his great ability just insures a tremendous future as a Wildcat. His fundamental soundness comes from excellent high school coaching.”

As a sophomore, Hord played in all 28 games, starting 21 of them, and was second on the team in scoring.  He scored in double figures 13 times, including a season high 24 points against Maine and was third on the squad in minutes played.

As a junior, Hord was All-SEC, All-District (Basketball Writers) and honorable mention All-American after leading UK in scoring (16.3 ppg) and minutes played (36.4 per game).  He averaged 18.4 ppg in SEC action and also hit 56.6 percent from the field during league play as opposed to 49.2 percent overall.  Hord scored a career high 28 points against Akron.

During his senior campaign, Hord averaged 8.9 points per game and 3.1 rebounds per game.  For the first 9 games of the season, Hord was averaging 14.4 points per game.  His point production certainly fell off after that.  “(Hord) started off to have the strongest year of his career, but there’s no question he’s in a slump,” Hall said. “That doesn’t diminish his contribution to the team,” Hall said. “I wish I could find 10 more like him.”  The highlight of Hord’s senior year came February 12, 1983, when he hit a 17-foot jumper at the buzzer to give Kentucky the edge over Auburn, 71-69.

At the end of college career, his 1,220 points scored ranked him 20th at Kentucky in All-Time Scorers.

“Derrick Hord is one of the finest young men ever to wear the blue,” Hall said, “and he has been a key factor in all four years. We will miss his feather touch and exciting play.”

After his playing days had ended, Hord hoped Kentucky fans would remember him as a team player and “somebody who played hard for a team that meant a lot to me and gave it my all when I went out there.”

Hord was drafted #67 Overall in the 3rd Round of the 1983 NBA Draft by Cleveland.