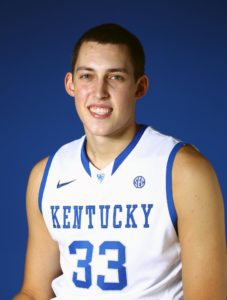 Kyle Wiltjer was born Kyle Gregory Wiltjer on October 20, 1992, in Portland, Oregon to Carol and Greg Wiltjer. His father, Greg Wiltjer, was a member of the Canadian national basketball team in the 1984 Summer Olympics. Wiltjer attended Jesuit High School in Beaverton, Oregon, where he led the school to two consecutive Oregon state championships.

Kyle Wiltjer averaged 19.6 points, 7.8 rebounds, and 2.5 assists as a senior for Jesuit High School. He was ranked 18th by ESPNU’s Top 100, 22nd overall by Scout.com, and 22nd by Rivals.com. He scored 11 points with two rebounds in the McDonald’s All-American Game and scored eight points with five rebounds in the Jordan Brand Classic All-American Game. Wiltjer scored 12 points for the World Team in the Nike Hoops Summit. He was named 2011 Oregon Gatorade Player of the Year and Oregon Class 6A Player of the Year. Wiltjer hit the winning shot with 1.7 seconds left to give Canada a 86-83 overtime victory over Argentina in the men’s bronze-medal game at the 2010 FIBA Americas U18 championship in July 2010.

On August 28, 2010, Wiltjer verbally committed to Kentucky. Wiltjer picked the Wildcats in a surprise announcement from the Boost Mobile Elite 24 event in Venice Beach, Florida. Wiltjer’s decision came without a visit to Lexington. He said, “I’m very excited to be a part of that team. The one thing is I wanted to surround myself with the best players. They have a great recruiting class coming in, and I thought it would be a great fit.” On November 10, 2010, Wiltjer officially committed to play at Kentucky. He chose Kentucky over California, Georgia Tech, Gonzaga, Kansas, Texas, and Wake Forest. He joined Marquis Teague, Michael Gilchrist, and Anthony Davis to create the nation’s top recruiting class.

As a freshman, Wiltjer saw action in all of UK’s 40 games on its way to the 2012 NCAA Championship. He averaged 5.0 points and sunk 35 3-pointers. He tallied 19 points on .500 shooting while adding three assists in a win over Penn State on November 19, 2011. He poured in a career-high 24 points to lead the way in a win over Loyola on December 22, 2011. He reached double figures in scoring (12) for the first time in his SEC career while also snaring four rebounds in a win at South Carolina on February 4, 2012.

As a sophomore, Wiltjer was voted SEC Player of the Week for the week of November 12, 2012 and was voted the SEC Sixth Man of the Year. Wiltjer averaged 10.2 points and 4.2 rebounds per game. He shot 36.7 percent from 3-point range and 81 percent at the foul line. He had 50 assists in 33 games. On November 9, 2012, he hit a career-high four 3s against the Terrapins, while also blocking a career-best three shots and grabbing six rebounds while leading the Wildcats with a team-high 19 points. Wiltjer scored a game-high 23 points against Lafayette, hitting 7-of-11 3-pointers, a career-high in makes and attempts, on November 16, 2012. He tied his career-best with seven 3s and recorded his first-career double-double against Lipscomb with a game-high 23 points and a career-high 12 rebounds on December 15, 2012. On January 2, 2013, Wiltjer scored a game-high 17 points in a win over Eastern Michigan. He scored a game-high and career-high 26 points while grabbing seven rebounds, dishing out three assists, and tallying three steals in win at Ole Miss on January 29, 2013. On February 6, 2013, he posted a team-high 18 points including a 6-of-6 showing from the free throw line in a game at Tennessee. The 2012-2013 season ended in a disappointing loss to Robert Morris in the NIT.

On April 1, 2013, Wiltjer posted on Twitter: “I just want everyone to know I AM NOT TRANSFERRING. The thought never crossed my mind. I love Coach Cal and the staff, UK, and the BBN. After talking with coach and the staff I understand what I need to do. This summer, I’m going to work hard to come back next season better and stronger to help my team fight for #9!”

For the 2013-14 season, Wiltjer was going to be looking for time in a loaded frontcourt that would include incoming freshman forward Julius Randle, freshman center Dakari Johnson, Alex Poythress, and Willie Cauley-Stein. On June 24, 2013, Wiltjer posted a letter on Kentucky’s athletic department website announcing that he was transferring to find a “significant” role elsewhere, saying he will seek a situation to help him “compete the way I know I can. … wherever that may be.”

On July 19, 2013, Wiltjer confirmed his plans to transfer to Gonzaga. Wiltjer took to Twitter to make the announcement and explain that deciding to leave the University of Kentucky basketball program was a very difficult decision. “This past month has been very emotional and challenging for me. Whether to transfer or not has been one of the toughest decisions of my life, so I would like to thank everyone for being so supportive through this process. The last two years at UK have been a valuable experience and I’m very grateful for them.”