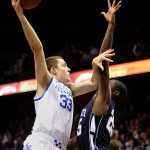 Doron Lamb had 26 points and No. 2 Kentucky beat Penn State 85-47 Saturday in the Hall of Fame Tip-Off tournament in Connecticut.  Kyle Wiltjer added 19 points and Terrence Jones had 15 points, nine rebounds and five assists for Kentucky (3-0), which didn’t put five players in double figures for the first time this season.  They didn’t need to.  The Wildcats held Penn State without a field goal for more than 11 1/2 minutes during the first half, opening up a 34-point lead, and never looked back.  Tim Frazier had 11 points, six rebounds and six assists to lead Penn State (3-1), which had opened the season with three wins.  The Nittany Lions shot 27 percent from the field, 16 percent in the first half.