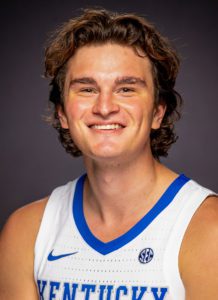 Riley Welch was born September 26, 1997, in Fresno, California to John and Jean Welch.  His father played basketball at UNLV and has served as a coach in the NBA for 15 years.  His grandfather Coley was the third-ranked boxing middleweight in the world in 1941.

As a freshman at UC Irvine, Welch appeared in 27 games and played double-digit minutes four times.  He scored five points in his collegiate debut at Denver.  He was named to the Dean’s List twice.

As a sophomore at the College of the Desert, Welch saw action in 27 games and averaged 8.2 points per game for the Roadrunners.  He also contributed 5.0 assists and 3.5 rebounds per game.  He dished out a team-high 134 assists for the season and sank 31 shots from behind the arc.  He scored a career-high 29 points against San Jacinto on Feb. 1 on 9-of-11 shooting and 10 of 11 from the free-throw line.  He was named to the Dean’s List twice.

On August 15, 2019, Welch agreed to join Kentucky as a walk-on. “Kentucky is one of the best programs in college basketball history, and to get a chance to be around and learn from a Hall of Fame head coach and be around the best players in the country, only good things can come out of it for me,” said Welch. “I can’t believe it’s real to a certain extent.”  “Riley, like his father, is a true gym rat,” Kentucky coach John Calipari said.  “Riley wants to get in the gym and work, so he will be a great addition to this group.  I’ve known Riley and his family for long
time. He comes from a basketball family that loves this game and loves challenges.  I’m excited to have him in the program and be a part of our family.”

As a junior at Kentucky, Welch saw action in four games during his first season with the Wildcats.

As a senior, Welch was a Southeastern Conference Winter Academic Honor Roll member.  He saw action in three games and made one start against Florida on Senior Day.

He graduated in May of 2021 with an undergraduate degree in liberal studies.