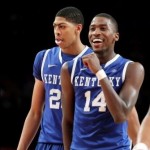 UK freshmen Anthony Davis and Michael Kidd-Gilchrist were named among 30 finalists for the 2012 Naismith Men’s Basketball Player of the Year Award the Atlanta Tipoff Club announced Wednesday.   Davis, a 6-foot-10, 222-pound freshman forward from Chicago, Ill., leads the country in blocks (138 and 4.8 per game) and ranks second in field goal percentage (.658). He leads the Wildcats in scoring (14.3 ppg), rebounding (9.8 rpg) and steals (43).  Kidd-Gilchrist, a 6-foot-7, 232-pound freshman forward from Somerdale, N.J. ranks second on the team in rebounding (7.8) and free throw percentage (.748 – 75 or more attempts) while ranking second in steals (35), third in blocks (31) and fourth in scoring (12.0).  The midseason 30 list was compiled by the Atlanta Tipoff Club’s Board of Selectors, which based its criteria on player performances from the 2011-12 college basketball season. The Naismith Trophy, presented by AT&T, will be awarded at the 2012 NCAA Men’s Final Four in New Orleans.