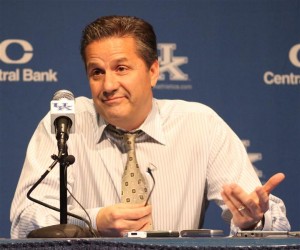 John Calipari was caught on Tuesday night on national television calling freshman swingman Terrence Jones a “selfish mother-(expletive)” during Kentucky’s game against Alabama. The one-sided shouting match has not sat well with Kentucky fans and shortly after the game Calipari offered the following apology on Twitter and Facebook:

“First of all I want to apologize for my language at the end of the game. I got caught up in the emotion of the game, but that’s no excuse. Sometimes you don’t realize in the moment that what you’re saying is on national TV. The BBN deserves better and so do my players.”