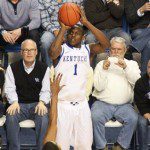 UK senior Darius Miller has been named to the Southeastern Conference Community Service team for men’s basketball as announced by the league office on Monday.  Miller has logged several hours in the community, including working with God’s Pantry, packing backpacks and delivering them to local elementary schools to children and families in need. He also visits children at the UK Children’s Hospital as well as other local elementary schools. Miller has also donated his time at the Ronald McDonald House as well as joined in the Cats’ Samaritan Feet project.  He was also selected as one of 30 candidates for the 2011-12 Lowe’s Senior CLASS Award. An acronym for Celebrating Loyalty and Achievement for Staying in School®, the Lowe’s Senior CLASS Award focuses on the total student-athlete and encourages students to use their platform in athletics to make a positive impact as leaders in their communities.  This marks the 14th year for the SEC Community Service Team for men’s basketball as well as for women’s basketball. All 20 league-sponsored sports have had a Community Service Team since 2004, with at-large teams for men’s and women’s sports being chosen from 1999-2003. The SEC began this concept with a football Community Service Team in 1994.