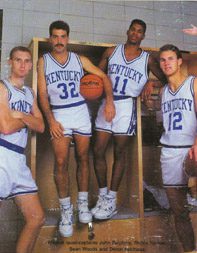 During the Coach Rick Pitino era, several of his teams adopted various nicknames -among them Pitino’s Bombinos and the Untouchables. But no team captured the hearts of Wildcat fans more than “The Unforgettables” of 1991-92. After battling probation for two seasons, the ‘92 squad set out to make its presence felt in postseason play. Led by seniors Richie Farmer, Deron Feldhaus, John Pelphrey and Sean Woods, the Wildcats advanced all the way to the East Regional Championship to face Duke. In what many have labeled the “greatest college game ever played,” Christian Laettner drained a shot at the buzzer that kept UK out of the Final Four. Athletics Director C.M. Newton summed up their accomplishments during a postseason ceremony in which the seniors’ jerseys were retired, “Today, our program is back on top, due largely to four young men who persevered, who weathered the hard times, and who brought the good times back to Kentucky basketball. Their contributions to UK basketball cannot be measured in statistics or record books.” 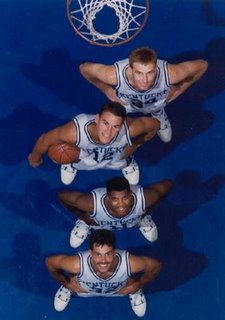